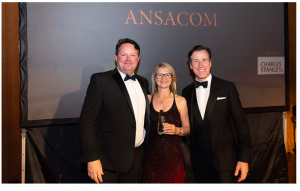 In front of a packed group of Kent-based businesses at the Saloman’s Estate in Tunbridge Wells, Ansacom MD Claire Burroughs picked up the coveted ‘Entrepreneur of the Year’ award from host Anton Du Beke and awards Chair Kent Invicta Chamber of Commerce CEO Jo James.

Ansacom is a telephone answering and outbound call marketing business that was established in 2001 and is based in Royal Tunbridge Wells.This Entrepreneur of the Year award, sponsored by Charles Stanley, was for ‘dynamic individuals who are running their own business and are able to demonstrate significant success and drive in growing their company.’

Claire was a popular choice, judging by the noise in the room when she was announced as the winner over fellow nominees Loch Associates (HR), Fox Marketing Associates and Sally Henderson Mentoring.

The judges awarded Claire the top prize thanks to her business leadership skills which has seen her grow the business consistently year on year, but with particular emphasis on her achievements in the last 12 months which included:

Claire said: “It is wonderful to win such an award which recognises the hard work and commitment not just of myself but of the whole team who share a combined ethos and vision for the future so that Ansacom can continue to grow and develop while always putting our customers first.”

Claire is a well-known local businesswomen and a great representative of the talent in Royal Tunbridge Wells and the wider South East area.